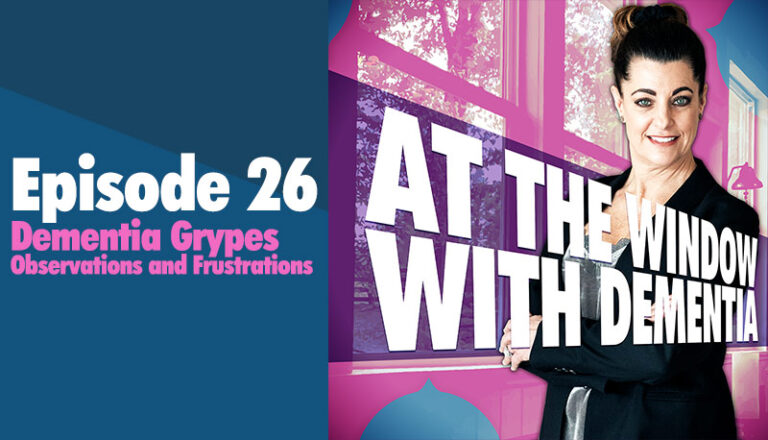 Today’s topic is Dementia Grypes, grypes with a Y, not an I.
I have a series that I started quite some time ago, and it’s called “Dementia Grypes” it’s something that I post on my Instagram page and also on my website. And it’s all about observations and frustrations about dementia. It’s perceptions that the public has, its things that I’ve seen, things people have told me, and the reason the “Y” instead of the “I” in grypes, it’s because it’s all about me asking why, why is it that, and then whatever my grype might be. So I wanted to spend today’s podcast sharing some of my gripes with you.

Grype number one: Why is it that when someone has dementia, people feel the need to talk louder to them as if they’re deaf. They’re not; they have dementia, and speaking louder to them does not allow them to understand any better than if you spoke with a normal tone. In fact, what it might actually do? It might actually cause them to be more agitated, more confused because they’re overstimulated. And let’s face it. No one wants to be shouted at. So the next time you see someone talking loudly to someone because they have dementia, do them all a favor. Let them know; it’s okay to speak in a normal tone.

Grype number two: Why is it that people assume that people who have a lower level of education are more vulnerable to getting dementia. It’s just not so, Alzheimer’s and other types of dementia know no boundaries, it doesn’t discriminate, it doesn’t care what your bank account number is, it doesn’t care what your profession is or was, it doesn’t matter what your last name is. It happens to everybody; everybody is at risk. So don’t make an assumption that when someone starts to forget that it’s because perhaps they didn’t complete high school, or maybe they didn’t attend college. Maybe they didn’t have a profession. It is never normal to have increased forgetfulness, that interferes with quality of life. There’s absolutely a difference between normal age-related forgetfulness and dementia. Normal age-related forgetfulness would be, “I forgot where I put my keys,” “I can’t remember what time my appointment is today,” “What was that movie that I really enjoyed?” That’s normal. But, “I can’t remember what my husband’s name is,” “I can’t remember how to get home when I lived there for years and years,” “I get lost in my own home.” No, that is not normal age-related forgetfulness. That is an absolute sign that there is something going on that needs to be evaluated urgently. Perhaps it won’t be dementia; perhaps you’ll find that there is something else going on. Maybe it’s drug interactions or some other condition. But until you get it evaluated, you don’t know. So do not make the assumption that it’s normal because it’s not.

Grype number three: There’s nothing that can be done if I do have dementia or my loved one does. So why go through the process of getting evaluated. Well, I’m going to tell you right now, I do not subscribe to that belief; there are always things that can be done. Now, be very clear in what I’m saying, I’m not saying you can stop it, or reverse it. But there are things that you can do; you do have the ability to change the course if you will. And what I mean by that is you can look at your risk factors, things that you may be doing that’s making your decline happen sooner than it needs to, or at a faster rate than it otherwise would. So no, I do not believe there is nothing that can be done. You need to look at your lifestyle. Look at your diet, Do you exercise? What about the medications you’re on? Could they be causing some problems? You need to look at your risk factors are you diabetic? Is your blood sugar well controlled? Do you have hypertension? Is your blood pressure really in the normal range or where we want it to be? What about sleep apnea? Has anyone been evaluated for sleep apnea? What we know is that when you have sleep apnea that is not treated appropriately, your blood pressure rises at night. It can cause an increased risk for vascular dementia. It’s not just about snoring and fatigue. There’s so much more. It’s really important to realize that you don’t take on the attitude of “Why get evaluated, it doesn’t matter” because it absolutely does.

Grype number four: “The person with dementia has nothing to offer.” What I mean by that is that they no longer can help. Let me tell you why that is so incorrect. First of all, everyone has value. Everybody wants to feel productive and feel that they are able to contribute. Too often, what I see, is that when someone is diagnosed with some type of dementia. The family, I’ll be it out of caring, usually comes in and takes over. They don’t allow the individual to do anything. Now, there are certain things that you don’t want your loved one with dementia to do, depending on where they’re at. For example, it may not be safe for them to drive; perhaps their confusion is at a point where they’re not safe to administer their own medication or maybe use a stove. And again, it is on a continuum. Dementia has many stages, and depending on where someone falls in that spectrum, their abilities vary. So if you have someone with early-stage dementia of whatever type, don’t deny them the ability to be productive. Again, perhaps they cannot do some of the things I already mentioned, but there certainly are things they can do. They can help out around the home; They can be social, they can share experiences and give input. There are so many things that they can do and need to do, but they’re denied the ability to do. Again, I choose to believe it’s out of love that their family steps in. But what they don’t realize is that by not allowing people to be as independent as they can safely be, you are robbing them of the opportunity to keep their brain active. And we know how important brain stimulation is to slow down the progression of dementia. So think about it: What is it that your loved one can do to help out? To be productive, because it will help their self-esteem and mood absolutely play a role in how their memory is, if you have someone that’s terribly depressed, and they feel as though they’re worthless. Their dementia is going to seem much more advanced than it may actually be. Perhaps they can help set the table or help prepare a meal, help straighten out around the house. There are so many things they can do, and believe me; they want to. No one wants to sit there and waste away.

Grype number five: This one is so frustrating for me. It’s when the family feels the need to put them on display to show them off if you will. Now, perhaps it doesn’t happen in public. Maybe it only happens when they come to see their provider for an evaluation. But I sit there, and I watched the family say, “Tell her what you had for breakfast” “Tell Laura what all your children’s games are” “Tell Laura, fill in the blank.”
No one wants to be quizzed like that. No one wants to feel as though they’re being tested. And what happens if they can’t answer those questions. We know that short term memory fails long before long term memory, so is it really that helpful to ask your loved one: “Tell Laura what we did yesterday.” They may have forgotten, and now you’ve made them feel as though they failed. I understand why families do it. They’re trying to show me, and others, that the loved one is doing okay, or that they still have certain abilities. But that’s not how it comes across, and more important than how it comes across. I want you to think about how it makes your loved one feel when they can’t answer the most basic questions. It’s heartbreaking something to consider.

Grype number six: This one’s so important. We need to make an attempt a deliberate honest effort to live in their world instead of having them live in ours. Because they don’t understand ours anymore. So we need to meet them where they live, where they’re at, where their memories are still strong. We need to go ahead and go out of our comfort zone, and yes, it is uncomfortable to recognize that your loved one is no longer in your reality. But we are blessed enough to have the ability to be in theirs; they no longer have the luxury of being in ours. It’s so important to make that effort. Listen carefully to what they say; it will give you clues to where they’re at. When they say they want to go home, even if they are in their own home. Ask questions. It’s like a window to where they’re at in terms of their memory. Perhaps it’s the last home they lived in. Or maybe it’s their childhood home. We don’t know until we ask, and asking can actually really be an incredible experience because it is a great opportunity to have an active conversation, which stimulates our brain, but we get to understand what memories they have, their fond memories, perhaps the things that aren’t so wonderful, but they’re willing to share. It may be an opportunity for you to know something about your loved one that you didn’t know before. Maybe it was before you came into their life. The most important thing is to live where they’re at, make them comfortable. We understand what’s going on. They may or may not, so it falls upon us as loved ones and caregivers to make them comfortable. And again, we need to live where they live. And I’m not talking about a physical structure. I’m talking about emotionally. Anyway, these are some of my gripes. I’ve got a lot of them. You can check it out on my Instagram page, which is @compassionate_education, or on my website, Compassionateeducation.com.
I would love to hear what some of your gripes are; you can write me at Laura at compassionateeducation.com put in the subject line “Grypes” spell it with the Y, especially if you’re wondering why people feel these things. Anyway, I’d love for you to subscribe to my podcast. I release new episodes every Tuesday, go ahead and subscribe. Thanks so much.