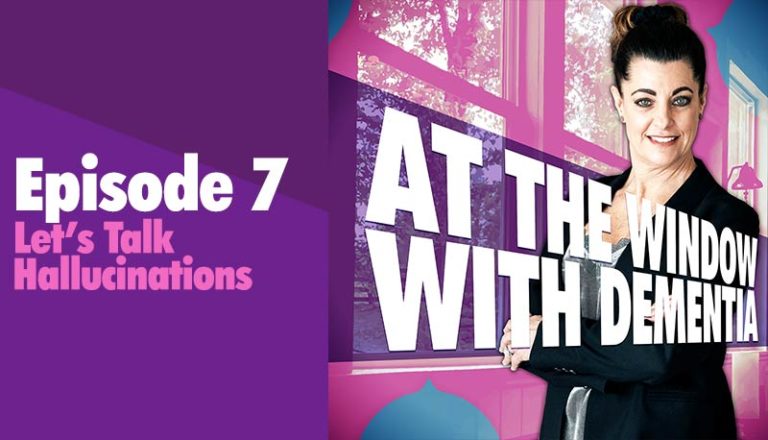 I think just the term hallucinations tend to have a connotation of something frightening, but it might surprise you to find that
most people are not frightened by their hallucinations, in fact, I’ve actually had more than one patient actually a handful, who said, please don’t take my hallucinations away. Some find them entertaining; some actually find them comforting. But again, I think that for those of us who don’t have hallucinations, just knowing that our loved one is hallucinating brings up this anxiety that something’s wrong, we need to fix it, we need to make the hallucination go away.

But when I see patients, and they tell me that they’re having hallucinations, and I asked about them, one of the first questions I ask is, Are they frightening? And more often than not, they say no. So again, if they’re not frightening someone, we don’t treat them.
And there are a few reasons for this.

The class of medication we use to treat frightening hallucinations is known as an antipsychotic or neuroleptic, and the black box warning that is associated with this class of drugs is that it is not indicated for acute psychosis, which is if someone’s having these frightening hallucinations. If they are elderly, which is defined as being 65 years old or older, and have a diagnosis of dementia, what can happen, although it is quite rare and I’ve never actually seen it myself, but it has been documented so it can possibly happen, is that there can be sudden death. It can be either cardiovascular-related or infectious-related, or sometimes, we don’t know what the actual cause of death is.

That said, what I tell people is, it’s a choice. It’s about weighing the risks and benefits, because ultimately, aside from the obvious concern of safety, it is about quality, and what I mean by that is, if your loved one is agitated, or hallucinating, and these hallucinations are frightening, then I don’t think the quality of their day is what we would want for them.

It would be much better to know that your loved one is calm and comfortable, and of course, not frightened. I’ve had people tell me that some of their hallucinations are about people coming to kill them, or most recently, I had someone talk about a dead body being carried in front of them in a coffin, and that scared them because they didn’t know who was in the coffin.

Again, it’s a very personal decision, but you do need to be aware of the possible risk of using one of these medications, which is why it is so important to understand, are the hallucinations actually frightening?
Or are they just entertaining and perhaps not bothersome?
Something that we definitely need to know before we treat.

Now some forms of dementia actually are characterized by hallucinations, for example, Lewy body dementia, or Parkinson’s related dementia, or even vascular dementia.
Of course, with Alzheimer’s disease, we do know that in the moderate
and advanced stages, hallucinations are quite common, but you don’t typically see hallucinations in the early stages.

What I also like to tell people is that the appearance or the presence of hallucinations can also be an indicator of infection.
If your loved one typically doesn’t report hallucinations, but suddenly they are hallucinating, the first thing I would recommend is to get them evaluated for infection. More often than not, it’s a urinary tract infection.
And as we get older, we lose some of the signs we have when we’re younger about a urinary tract infection, that very distinct lower abdominal cramping, or burning with urination. So as we get older, perhaps the only evidence, especially in the setting of someone with dementia, is that they begin to hallucinate.

So again, if your loved one doesn’t typically report hallucinations and suddenly they are hallucinating, you need to urgently get them evaluated. Typically, this is not a trip to the ER, it’s a phone call to your primary care provider, or your neurologist, or even a trip to the urgent care, as simple urine analysis can quickly determine whether or not, your loved one has a UTI a course of antibiotic treatment can easily treat an uncomplicated urinary tract infection.

So again, it is something that if all of a sudden, there’s a change, and for those of you who’ve seen it before you know exactly what I’m talking about, the first thing you need to think of is an infection, a hallucination is when one of our five senses is stimulated, and there’s a belief that they see something, hear something, they feel something, maybe they taste something, or even smell something, but they believe that it’s there.
The most common one is to see something.

Typically when you start hearing about auditory hallucinations, someone hearing something, you start thinking about schizophrenia, but if your loved one doesn’t already have that diagnosis, and if they are not in their early 20s, which is when schizophrenia, typically first presents, then it’s unlikely that it’s schizophrenia-related. It’s probably a hallucination.

So then, what is a delusion?
Often people interchange those two terms. A delusion is typically some sense of paranoia; it is when they believe something to be true. Not that they see something or hear something, it’s a thought. And again, if you have to categorize these thoughts, I will tell you more often than not, it’s a paranoid thought, it’s actually something that is quite common in Frontotemporal dementia, which is a dementia we haven’t even spoken much about.

If someone starts becoming paranoid or having delusions and they don’t typically have them, you do need to get that evaluated urgently as well. Because not only may it be an indicator that there’s some type of infection, but perhaps there’s some type of a medication interaction going on so, this is something that is treatable. You do need to get it evaluated. I don’t want you to start to stop any medications, go ahead and get the guidance of your provider before you make any medication changes, even if it’s after hours, or if it’s on the weekend. Most places have a 24-hour hotline that you can call, and you can get some direction in what you need to do. Unlike hallucinations, that are rarely frightening, delusions tend to be quite troublesome for the person experiencing them. It can be the cause of a lot of arguments and animosity and certainly can provoke a lot of agitation and aggression.

So again, do not just expect that this is normal, because it is not, so you may be wondering, what are some of these medications I’m talking about these antipsychotics or neuroleptics. Well, the most common ones are Risperdal, or Seroquel, Geodon, Haldol, Abilify.

Again, I’m not telling you that there is not a place for these medications, I prescribe them quite frequently, but only after I’ve had a conversation with the patient with the family, and review that black box warning so that they are informed. And then we talk about the risk-benefit like I spoke about just a bit ago, there is a role for these medications, outside of treating psychosis. They’re frequently prescribed for bipolar, acute mania agitation, Tourette syndrome, and hyperactivity, as well as many other diagnoses that benefit from the use of these medications.

The black box warning is exclusively for elderly patients again to find at 65 years of age or older with a dementia diagnosis, so what’s the takeaway on hallucinations?

What I would tell you is, talk to your loved one.
Ask if they’re having hallucinations because believe it or not, many times, the person having them actually is able to distinguish reality from hallucinations. You can ask them what they’re seeing, what they’re hearing. Many people and this is actually quite fascinating to me; they have a relationship with the people that show up in their hallucinations. They have names for them; they assigned personalities to these hallucinations. And they actually feel that there is some level of comfort. Now, a common report is that there are people, just people in the house.

And what I find is that as the caregiver, as the family member, as the person who loves this person who has dementia. You are able to comfort them. Sometimes not always, but sometimes by simply saying that they’re not there will suffice. Other times, you tell your loved one to tell them to go away if they’re bothersome; perhaps they’re not allowing your loved one to fall asleep. Maybe they’re making too much noise; You’d be amazed at all the stories I hear about hallucinations. But reassured your loved one, tell them they’re safe. That’s what they need to hear. And, again, more often than not, you won’t need any medication to go ahead and treat that hallucination.

I hope this has been helpful for you.

Please let me know if you have any questions, you can reach out to me on Instagram, my handle is compassionate_education, or you can reach me through my website which is compassionateeducation.com, please subscribe to my podcast, and be sure to share it with anyone that you think would benefit from the information. Every Tuesday, I release new episodes, so check back. And again, Thanks for listening.