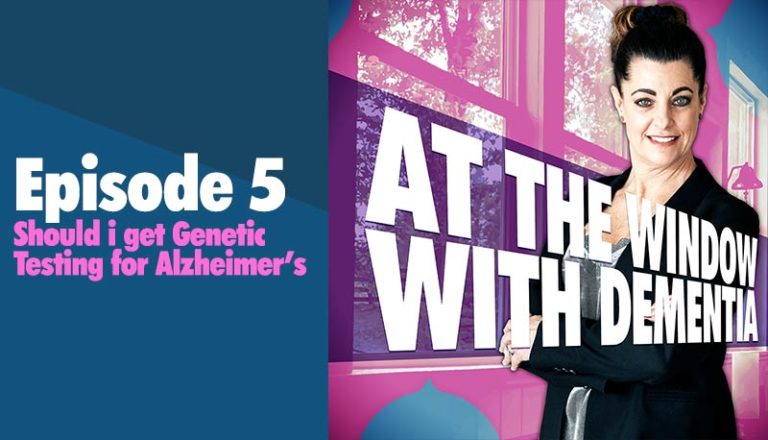 Should I get genetic testing for Alzheimer’s

It’s quite a controversial subject; a lot of today’s podcast will just be my opinion. So take the information, consider it, and then you make your own decision. But I would advise you to go in with your eyes wide open. Because what are you going to do with that information?
I’ll come back to that in just a bit.

So let’s talk about Alzheimer’s disease, not talking about just generalized dementia, I am specifically talking about Alzheimer’s disease, and there are two categories, we have early-onset, which means that the symptoms develop before age 65, but actually more commonly they develop before age 60, but by definition, before age 65. And then you have late-onset, which is when the symptoms again, not the diagnosis because sometimes that happens several years after some of the issues start to present, but 65, or older when the symptoms start to develop, that would be late-onset, not to be confused with late-stage, very different, late-stage is when the Alzheimer’s is actually getting advanced were late-onset denotes the age in which it started. So, there are a couple of companies out there that we’re all familiar with, there’s 23andMe, as well as Ancestry.com and there’s probably some other genetic testing services out there that are offering genetic testing for a wide variety of diseases, Alzheimer’s is one of them. And what I want to talk about today is whether or not you should get the test.

So let’s first talk about late-onset again, this would be when the symptoms start at 65 or older. There is a test that’s offered, and it is called APOE e4.

So, what this is, it is a variant of APOE which is a gene that we all have, we inherit one copy from our mother and one copy from our father, but the variant, the form of the APOE can be different, you may receive an APOE e2 from your mom and an APOE e3 from your dad, the one that specifically is a marker for increased risk, not a certainty, but increased risk of developing Alzheimer’s is the APOE e4, and e4 is the variant.
So, what can happen is, again, you inherit a chromosome from your mother and a chromosome from your father, you get this pair.
And if one of the two has the APOE e4 variant, you are at a slightly increased risk. If they both have the e4 variant, you’re at a slightly higher risk than if just one parent were to pass it on to you.

But hear this, if both parents pass on the APOE e4, it is not predetermined that you will develop late-onset of Alzheimer’s disease. So I caution you, If you go ahead and you get this testing and let’s say you find out that you have the e4 variant from one or both of your parents, Is that going to change how you live your life? Is that going to haunt you every time you forget something? Are you going to assume that it is the beginning of the development of Alzheimer’s versus maybe just normal age-related forgetfulness? So it is a dilemma. What do you do? I guess the easy answer is if you opt not to get the test, maybe we should all live with the assumption that we are at risk, because what is the number one risk factor for developing late-onset Alzheimer’s disease?
It’s advancing age.

What we know is that once you hit 65 years of age, every five years, your risk for developing late-onset Alzheimer’s doubles.
That’s pretty significant.

In comparison, both your parents could pass on the APOE e4 variant, and your risk is not as high as advancing age. So again, think about whether or not you want to take a test that tells you, you may be at risk.

When you know if you live long enough to reach 65 or older, you are at risk. Period. You don’t need a genetic test to tell you that your birth certificate will tell you that based on your age.
Now, it’s slightly different if you’re talking about early-onset Alzheimer’s disease, which is defined as symptoms beginning before age 65, and as I just mentioned, Usually, it’s before age 60.

Again, there are genetic markers; it’s not the APOE. There are different markers; There’s the APP; there’s the PSEN1, and the PSEN2 early onset is autosomal dominant. And what that means is that if you inherit that gene from just one parent, you don’t need to inherit it from both, but just one, you have near 100% certainty of developing early-onset Alzheimer’s disease. And that’s frightening.

However, early-onset, you’re probably going to be in the middle of your career, so perhaps, it may be something where you want to get tested so that you can do some future planning. It may factor into some big decisions you make if you buy a house if you buy some investment property, what you do with your savings. It certainly is a significant part of that equation in planning out your future.

So it’s a little bit different, whether you test for the early onset versus the late-onset, what I would suggest is if it runs in your family, and you’re concerned because just because your mother has it, doesn’t mean you’re going to get it. She may pass on a different gene to you.
It may not be passed on, so if your parent has it, it does not mean you will have it, but you do have a significantly increased risk, you won’t know until either presentation of the disease or genetic testing, and in this case, if you opt for genetic testing, I highly encourage you to go to a genetic counselor. You need someone to take you through this process and be there to explain the results. You don’t want to receive the results in the mail and then spend the next; I don’t know how many hours, days, months on the computer, doing your own research.

You need definitive answers; you need scientific information, you need an expert to interpret that for you. Again, we’re talking about Alzheimer’s, not about dementia, Alzheimer’s is a type of dementia. This has nothing to do with your Lewy Body or your vascular dementia, your multi-infarct, or your alcoholic dementias, specifically, Alzheimer’s disease, early-onset, and late-onset.

So this is something you want to give a lot of thought.
If you have any questions, my advice to you is to ask an expert.
Talk to your health care provider, if you’re not in touch with a neurologist, get in touch with a neurologist, many academic centers offer genetic counseling, and some community centers offer genetic counseling.
But if you’re concerned before you go ahead and just submit your DNA for testing, I do want you to think about what you would do with the information, again, we’re talking two different scenarios early-onset, late-onset.

My humble advice to you, if you’re concerned about late-onset, don’t do the testing because it will probably alter how you live your life, and it may not be a positive. We should all live with the assumption that if we live long enough, we are at a significant risk of developing Alzheimer’s.
What we know is that one out of 10 people, 65 or older, have Alzheimer’s disease.
So instead of getting the test, live with the assumption that you are at risk, and go ahead and make some lifestyle modifications, eat well, have nutritious meals, get plenty of sleep, and regular exercise.

Remember, it is much easier to prevent something than to treat it. Anyway, I hope this answers some questions about genetic testing and the difference between early-onset and late-onset Alzheimer’s disease.

If you have any additional questions, I encourage you to speak with your healthcare provider, you can always check out my Instagram page my handle is at compassionate_education, and my website is compassionateeducation.com

There’s a lot of information on both platforms, feel free to go ahead and send me a message if you have a particular question or topic that you’d like me to address during one of my podcasts.
I hope you decide to subscribe!
I have a lot to talk about.
I’ll see you next week.
Bye-bye.