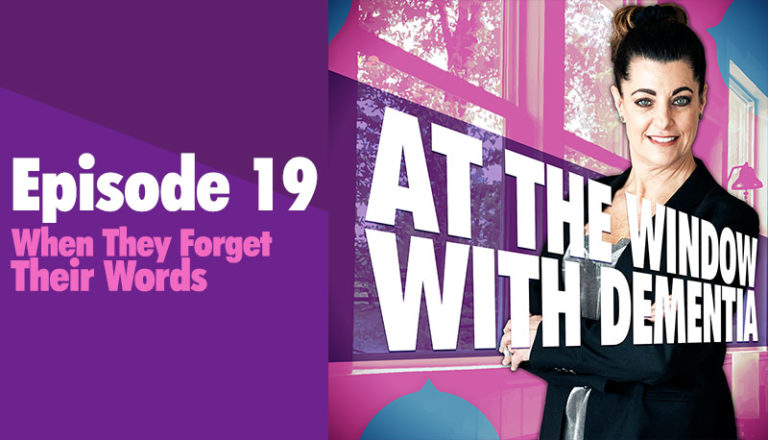 When they forget their words

People have asked me before, how do I come up with the topics for each episode. Well, sometimes I just work off a list that I have ongoing, it’s a list that an idea will come to my mind, and I just added to the list, but sometimes I actually am inspired by something that’s just happened. And on those occasions, my episode is spontaneous. Today’s episode is just one of those episodes it’s spontaneous, it’s about something that happened actually earlier today. So, I’m not sure if I’ve mentioned on previous podcasts or not, but my mom lives with us, she has her own apartment, she’s independent, we theoretically could coexist and never see each other, although it doesn’t happen, she has her own entrance, our residences are connected through a stairwell with a door, but she comes up frequently and visits with us and vice versa. And today, my oldest daughter came over with her husband, and their brand new baby, and I called my mom to say come on up, and you enjoyed this time with our brand new granddaughter and great-granddaughter.

So, of course, my mom grabbed her camera so she could take some pictures and came right up. So it was a lot of fun to have everyone together. And when my mom came up, she tends to get nervous, even around family members, which was really so unfortunate, and it’s been going on for a couple of years now. And it seems to be getting worse and worse. And for those of you who have any type of experience with dementia, what you know is that anxiety can often make recall more difficult, including something we call word-finding difficulty, and my mom suffers from word-finding difficulty. And when she gets nervous or anxious, it gets so much more pronounced, which of course, then feeds into anxiety, and you know how that goes, it’s a vicious cycle, and it got to the point where my mom was so uncomfortable because she couldn’t even carry on a conversation without struggling for words. And it became more about the word she couldn’t get than the word she was saying, even though the words that she was able to get out for so many more than the occasional ones that she would forget. It was breaking my heart to see my mom struggling like that.

And so, we’re all used to it, and we don’t bring any attention to it. A little bit later, my mom and I went outside, and we went for a drive, and I didn’t say anything about her word-finding difficulty that she brought it up, and she said, I hate this. And I said, What do you hate. What’s wrong, and she said I hate that I can’t find the words that I want. And as she said that she continued to struggle, getting those words out. And we talked about it, and I told her how it does not have any implication on her level of intelligence because her remark to me was just so stupid. And I reassured her “Mom, this has nothing to do with your intelligence; this is part of the process. And I explained to her how anxiety makes word recall so much more difficult. And we’ve had this conversation in the past. But it was as if it was the first time she’d ever heard it. So we talked more and more about it, and I explained that the harder she tried to find that word, the further it went away. And sometimes it does come back in nowadays sometimes it doesn’t. But the comparison I made that seemed to ring true to her, and she really grasps the concept was: “it’s like being on a diet”, as soon as you know you’re on a diet you instantly become hungry. It just happens. You want things that you’ve never even thought about wanting, and every commercial seems to be about food, every conversation about a meal because now you’re on a diet. And so, you know that you shouldn’t take in as many calories, or certain foods like you might if you weren’t on a diet.

And the same thing with anxiety, you know that anxiety makes word-finding more difficult for everybody regardless of whether or not they have some type of memory impairment, you know it’s gonna happen, but nonetheless, when it happens, you get more anxious. When otherwise, if you didn’t have any memory issue or it wasn’t a concern for you. You might chalk it up to, I just can’t remember, but again, in the setting of that diet or now in the setting of memory impairment, it takes on a whole new meaning. So she said, how do I treat this? What do I do? And I said, Well, The first thing I would do is try not to be bothered by it, which I know that just seems so ridiculous because if someone said that to me I would just get so enraged. But the reality is, you don’t want to fixate on the words that you can’t find because it’s just going to be a perfect setup for forgetting another word.

And they explained to her when you don’t remember a word just keep talking past it. People will figure out what you want to say just in the context of the conversation. What about medication, well that’s certainly an option. But it is a really fine line, treating someone with medication for anxiety so that they’re relaxed and calm, but not catatonic, and not just a blob sitting in a chair staring at a wall. You don’t want to remove that personality, and certain medication certainly can do that. One of the things my mom has been doing for quite some time now is when she knows she wants to say something but can’t remember even the topic that she wants to talk about; she repeats this mantra (She’s probably not even aware that she does it, but she does it quite frequently) And it goes something like, “What was I going to say, What was I going to say, What was I going to say.” And I think in part it’s just an automatic response because she’s probably trying to buy some time before she can remember what she wanted to say. But I don’t recommend that, and the reason that I don’t recommend it is because you’re making it more of an issue by putting it out there like that. The truth is, there is no good answer for what you do when people have word-finding difficulty, other than just treat it like it’s no big deal. Don’t jump in to try to rescue the word, because that can make people feel inadequate. Just let it be.

But if it really seems to be an issue that is terribly bothersome to them, then you can offer the word and see if that’s what they were looking for; instead, my advice is this: support them, reassure them, let them know what happens to everybody and be patient. We have a tendency to want to fill that silence, that dead air, but give them a minute, let them fill that space with the word. Be aware of the cadence of your speech. Some people, me included, we tend to talk a bit fast, and that can make people nervous, so try to have a deliberate slowing down of your speech, see if that helps. Let them know that it’s okay. Treat it like it’s not an issue, and maybe by them realizing that you’re pretty calm about it, in turn, hopefully, they’ll have a little bit more relaxed sense about it as well. At the end of the day, the reality is, dementia sucks, big exclamation mark at the end of that.

Anyway, I just felt the need to put it out there. Again, it was one of my spontaneous topics, for those of you who are living with someone who has some type of memory impairment, I’m sure this story is all too familiar for you. And for those of you who haven’t had that experience, count your blessings, you’re one of the lucky ones.

Anyway, Thanks for listening. I hope you decide to subscribe to my podcast. I release new episodes every Tuesday. Feel free to check out my website at compassionateeducation.com, all previous podcasts and this one are listed under the podcast tab, and you can find the transcript written for all the podcasts as well. You can also check me out on Instagram, I hope you check it out! I hope you decide to subscribe, and if you like what you hear, please leave me a rating. Thanks again, and have a great day.